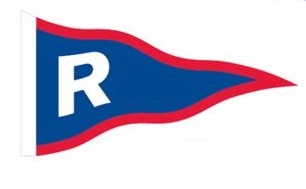 In 1985 the Rochester Yacht Club hosted the World Cup and Golden Feather , with Harry Voss at the helm, won the regatta, which had attracted entries from Switzerland, France and Sweden, with four yachts in all from across the Atlantic competing in Rochester. This included the Baron de Rothchild’s team and lavish tender.

Five days before the start of the 1985 Rochester Eight-Metre World Championship Harry Voss discovered unhappily that Golden Feather, the yacht he had purchased to race in the series, failed to measure in.After many frantic hours and at least least one sleepless night spent modifying the boat, Voss and his crew put Golden Feather in the water minutes before the deadline. She had an approved measurement certificate just in time for the starting gun. Sailing out to the course for the first race, Voss wondered if all the hard work was worth the effort. By the end of the regatta, he had no doubt it was; Golden Feather won the Eight-Metre World Championship, sailed July 20-26 on Lake Ontario out of Rochester (N.Y.) Yacht Club.

If it hadn’t been for the help and encouragement of one of his toughest competitors, Voss, of Rochester may have never made the deadline. “When he heard about my troubles Pelle Petterson came over to me and said he wanted to see me in the regatta. He offered his expertise as a naval architect and the help of his whole crew to get the boat ready in time.” Voss said.

Golden Feather, designed in 1984 by Peter Norlin, placed fourth in last years’s Eight-Metre World Championship in Toronto despite a protest over a scanning infraction.  Voss bought the boat some months later and did an extensive amount of work to correct those measurement problems. He added bilge stringers and he reinforced the transom. He knew the boat had a lightweight deck and he would sail with a penalty. But what he hadn’t anticipated learning a few days before the regatta was that Golden Feather had too much draft. According to Voss 2 3/4″ had to be removed from the keel and approximately 1,1oo lb.  if lead taken from the keel had to be relocated in the boat.

“Pelle told us hoe to take out a minimum amount of lead and he showed us how to fair out the keel. …At the and of the regatta, Pelle who finished second, came over and hugged me,” Voss said. Anyone who has raced against Petterson, go Goteborg, Seden won’t be surprised by such an example of his good sportsmanship.

Golden Feather, a wooden Eight-Metre posted 11.7 point in total in the series that permitted one throwout. Petterson scored 19.7 points sailing his new design, Dolphin, built of fibreglass. Original plans for the boat included a winged keel but Petterson changed his mind and built a conventional keel for his new Eight-Metre  after his Six-Metre Irene performed poorly with a winged keel at the World Cup regatta last April.

Only one of the 17 Eight-Metres at the Worlds had a winged keel, the Bruce Kirby designed Octavia, defending world champion. This year Octavia placed fifth overall. Sailed by Elwin Cathcart of Canada, she had 44.7 points.

Third and fourth in fleet went to Gaulois and Iroquois, respectively. Gaulois, a new aluminium yacht designed and steered by Jackues Fauroux of France, had 38 points. Eugene van Voorhis of Rochester sailed Iroquois a 1968 Sparkman & Stephen design, finished with 42.7 points.

The series had a variety of wind conditions. In the light-air fifth race, Petterson was leading before he fell into a hole, allowing Armida II, the oldest boat in the fleet, to pull ahead and win. A 1929 Frank Paine design, Armida II was sailed by Thomas Simpson of Toronto. The fleet at the Worlds had a good mix of modern and vintage Eights. To make the competition even more lively among the older boats, the Eights built prior to 1960 were eligible to race for the K.N.S. Sira Trophy, offered by His Majesty King Olav V of Norway. Vision, built in 1930 to the design of Charles Nicholson, won the Sira Trophy. The boat is owned by Robin Clarke of Toronto.

While the older boats remain actively in competition, the fleet is growing; five new Eight-Metres have been built in the last two years, that is one of the reasons why the Royal Canadian Yacht Club in Toronto is giving serious consideration to a proposal for the Canada’s Cup match racing series to be sailed in Eight-Metres, as was last done in 1954. Boats rating 32′ under the international Offshore Rule have most recently sailed for the Canada’s Cup. Changing to Eight-Metres is a possibility, said David Hague, chairman of the Canada’s Cup Committee of the RCYC. “Eight-Metre are an attractive match-racing class that take advantage of 12-Metre development. And there’s been a considerable amount of renewed interest in International Rule boats,” Hague said.

Whatever the decision of the Canada’s Cup Committee, one thing is certain, Harry Voss is hooked on Eight-Metre racing. Voss, who had never raced Eights before this year, had already started making plans for the next two years to take Golden Feather to the 1986 World Championship in Cannes, France and to the 1987 Worlds in Helsinki, Finland.