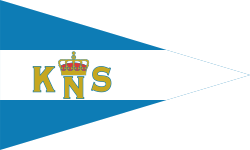 In 1983, Iroquois traveled to Norway, going through the Trans-Sweden canal system including the Gotha and Troihattan canals and then sailing up the west coast of Swedeninto Oslo fjord to the Island of Hankø, Norway.

Fifteen 8 Metre Yachts competed in this World Cup including Vision, with was sailed bu Glenn Foster of the Seawanka Corinthian Yacht Club, and the Sira, sailed by His Majesty, King Olav V of Norway. Iroquois won the regatta with was very festive and included being entertained on the King’s motor yacht Norge. The crew on Iroquois included Frank Shumway, Charles Van Voorhis, Lee Van Gemert and Ohne Vanderval. The weather was moderate until the last day, when after tacking upwind against16 foot waves, Iroquois lost her steering ability, and had to limp in under her trim tab.