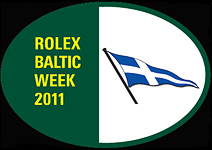 Racing for their Robbe & Berking World Championships, the 8-Metres witnessed a superior performance by Hollandia (NED) who, having been pushed hard by Lafayette (GBR) and Yquem II (SUI) all week, secured the title emphatically with two wins in the final day’s two races. Able to discard a DSQ for an infringement earlier in the week, Ruud van Hilst and Jos Fruytier’s 2005-built 8-Metre won five of the nine races to take first overall.

Ruud van Hilst, the co-owner, said: “To finish a world championship with two bullets is really fantastic. It was great racing on the Inner Fjord and the entire event was very well organized both on the water and on shore. The people are very friendly here, which we knew before.” For Hollandia, Flensburg was the scene of a previous triumph, when they won the 8-Metre European Championship in 2006, and this also signifies her second world title win, having claimed the number one spot in Canada in 2005. Murdoch McKillop’s Lafayette scored a second and third to secure the runner-up position, while Jean Fabre’s YQuem II pushed a little too hard in the final contest and scored an OCS which left them in third overall.

The Canadian 8-Metre Raven, built in 1938, continued her consistent run of fourths, while there was a high point for HM King Harald V of Norway on Sira who took his first podium position with a third in the final race. These two yachts were also the leading competitors for the prestigious Sira Cup, with Richard Self and Mark Decelles’ Raven taking the title ahead of the eponymous royal competitor, from the Swiss Catina VI of Fred Meyer. Reinhard Brucker, the German bowman on board Raven, commented: “The boat was perfectly prepared and we trained for a week on Flensburg Fjord. We built the success on this and defended the Sira Cup we won last year in Toronto.”

HM King Harald V of Norway said: “It was a great regatta and we are happy with the outcome. Raven was unbeatable this time, the boat was very fast and they sailed well. Maybe we should have trained here too for a week prior the regatta, we had only one day’s preparation.”

Among the other 8-Metre divisions competing for their own prize, Hollandia was also crowned first Modern boat, the 1912 Sposa (Richard Gervé, Germany) won the First Rule fleet, and Catina VI, belonging to Swiss Fred Meyer, president of the International Eight Metre Association IEMA, triumphed among the Neptune class.

Racing for the all German Robbe & Berking 6mR Sterling Cup concluded with Andreas Krause’s Sleipnir II taking a clear win, in fact the crew, skippered by Christoph Nielsen, won the event with a race to spare and were able to return to shore early having secured the trophy. The final race win and second overall went to Dr Thomas Kuhman’s Mena, with Aida (Bjoern Storsberg) finishing third overall.